Stay up to date with all of the latest news with SZapp!

From the APRIM - James Lloyd 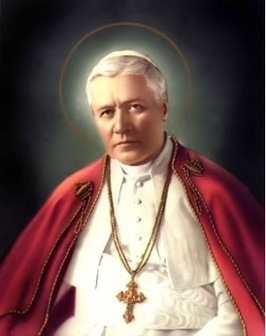 On Saturday, we celebrated the Feast of Saint Pius X, the patron saint of our school and parish. This week, we were blessed to gather in smaller groups to honour the life and work of Saint Pius X. On Monday, our Receptions – Year 3 students gathered for a prayer service, and on Tuesday Fr Mathew kindly celebrated Mass with our Years 4-6 students. Both gatherings were wonderful opportunities for us to reflect on what makes our school such a special place to learn.

Saint Pius X was born on the 2nd of June, 1835 in a village in Italy called Riese. His name was Guiseppe Sarto, but his mum and dad called him ‘Beppo’ for short.

Beppo was a kind child. His family were very poor and could not afford to send him to school. So a priest called Fr Luigi decided he would encourage Beppo to study hard to earn a scholarship so he could attend school to become a priest. Beppo had wanted to be a priest for a long time.

His prayers were answered and after earning the scholarship and attending school, Beppo was ordained a priest. He was so popular that the Pope made him a Bishop and before long, he was made a Cardinal. Wherever he went, people loved him.

On August the 9th, 1903, Cardinal Beppo was elected Pope – the head of the Catholic Church in the world. When he became Pope, he used the name Pius the tenth (Pius X).

He did lots of wonderful things and always wanted to help the children and the poor.

One thing that he will be remembered for was allowing children as young as 7 years old to receive Holy Communion.

Pope Pius the tenth died on the 20th of August, 1914. We celebrate his feast day on the 21st of August every year.

Students Returning for the 2022 Academic Year

Thank you to those families who have submitted the form below.

Term 3 is traditionally a time in schools when forward planning of budgets, staffing needs and class allocations begin to take place.  Like other schools St Pius X endeavours to meet the needs of all students and families it serves.

In order for the school to continue to offer programmes that are of value and to provide appropriate facilities for the future it is important to know enrolment numbers for 2022.  I am therefore writing to request that you please complete and submit this form by this Friday, 27th August 2021 - https://stpiusx.schoolzineplus.com/form/109?preview=1

If, of course, your only child at St Pius X School is currently in Year 6 you do not need to complete the form.

We are seeking your feedback regarding your family's experience during the Lockdown in Week 1 this term.  Please complete this form and submit by this Friday, 27th August - thank you.

All members of our community are invited to complete this Survey which will give us further information to use in our efforts to track our progress here at school and form educational and community goals for 2022.

The Survey is totally confidential and all participants are de-identified.  Analysis of the Surveys will be presented to teachers, staff, and the School Board and I will also complete a report to the community early next term.

As an incentive to participate all students of parents who have completed the Survey will have the chance to be selected as the ‘Principal for the Day’ (the draw will be held in Week 1, Term 4.). Please join in the fun and more importantly, have your say on the future of our school, what we need to keep doing and what do we need to change?

Further information regarding the Survey, along with access via the QR code, Confidentiality, Use of Data etc is available in this attachment - NSI_Partnerships_Parent_and_Caregiver_Survey.pdf

The Survey is also available via this link - www.NSIPartnerships.com.au with the code SPXLLLP in the Start Questionnaire field.

The link to the entry form for the Principal for a Day drawer is - https://stpiusx.schoolzineplus.com/form/110

We thank you for participation in this important Survey.

Last Thursday Haasini S and Kyra K visited the studios of Radio Italiana and joined our program to share their experiences as Students with High Intellectual Potential (SHIP) within the school setting.

Here is what they have to say -

“Last week we went to Radio Italiana 531. We experienced Italian music and how to communicate and speak in Italian live on air.

Tune in tomorrow to Radio Italiana 531AM from 6.00pm to 6.30pm where Year 5 students Riley P, Ethan V, Akshath S and Lysander Z will interview Mr Przyibilla about his experiences with the Royal flying Doctor Service.

The P&F Committee are holding the Father’s Day Stalls next Friday, September 3rd.
Each class will be allocated a time for the children to choose and purchase something special for their Dad/Father figure.

Each child is asked to bring a paper or plastic bag to keep their purchases safe. Please remember that, to ensure there are enough for all the children in the school, they will be limited in the purchases they may make.

Thank you from the P&F Committee.

Information for Volunteers - new Responding to Abuse and Neglect training

Thank you for the support you continue to provide by being a Registered Volunteer here at St Pius X School.

There are changes to the requirements in respect of the Responding to Risks of Harm Abuse and Neglect - Education and Care (RRHAN-EC) training which is one of the essential components of your Registration.

As your volunteer work here is with children (under 18 years), you are a mandated notifier and all volunteers must now update their training which is available via this link -  RRHAN-EC training.

The training must be undertaken and your Certificate provided to Susan Trimboli before end of the next term.

Please contact me if you have questions and thank you again for your participation in the life of our school.

The P&F Committee are looking for helpers for the Father’s Day Stall which will be held on Friday September 3rd.

The stall will run throughout the school day so if you are able to help out for an hour or so, it will be greatly appreciated!
If you are able to assist please email the P&F Committee at pandf@stpiusx.catholic.edu.au and provide the following information:

Please be aware that you will need to wear a mask while helping on the stall.

Thank you from the P&F Committee

Adults are Required to Wear a Face Mask

All adult visitors to a School are required to wear a mask at all times - when inside or outside - thank you for your cooperation.