Stay up to date with all of the latest news with SZapp!

From the Deputy Principal - Des Henthorn

Next Thursday the 25th of March our Year 3 and Year 5 students will be participating in a Coordinated Practice Test.  This test serves two purposes. Firstly it allows the students to look at and attempt an online test, Secondly it will determine if the school and system can support the running of NAPLAN online.

With our recent upgrades we are very confident of our school's capacity to complete the test but as a system we have been asked to logon as close to 11:00am as possible to see if there are any problems.

Classroom teachers are aware of this and are supporting your children to participate in this test.  If you have any questions or concerns about your child participating in the 2021 NAPLAN online testing, please do not hesitate to contact myself or Greg Parker as we would be very happy to talk to you about any concerns you may have.

NAPLAN will take place next term, commencing the 11th of May through to the 14th of May 2021.

From the APRIM - James Lloyd 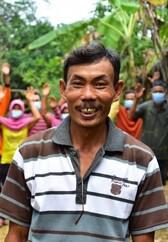 Arsad, an Indonesian farmer, had no toilet in his house, so always had to walk into the forest to the open defecation area. His family was often sick and open defecation caused many neighbourhood disputes. With the support of Caritas Australia and its partner agency, Laz Harfa, Arsad took part in hygiene, sanitation and financial management training. He then funded the building of a toilet in his house and helped other community members to save money to construct their own toilet.

Now, Arsad’s family is healthier, their community no longer practices open defecation and is more harmonious. Arsad inspired his community to ‘Be More.’

·         Around 17 percent of Indonesia’s rural population, or 45 million people, practice open defecation – going to the toilet outdoors in fields, forests and other open spaces. (World Bank)

“Aspire not to have more, but to be more.” Please support Project Compassion: lent.caritas.org.au

Saint Patrick was born in England, but when he was a teenager, he was captured by Irish pirates who took him to Ireland as a slave. After six years, Saint Patrick escaped and returned to England and his family.

When Saint Patrick became a priest, he traveled back to Ireland as a missionary so that he could teach the people about God. He used examples to explain the mysteries of the faith in simple ways. One day, Saint Patrick compared the Trinity to a shamrock. He said that the shamrock has three leaves, but it is only one plant. In the same way, God is three persons—Father, Son, and Holy Spirit—but one God.

God used Saint Patrick’s kidnapping to convert the Irish people. In our lives, God uses the bad times to bring about a good we do not always see. We must be patient and trust Him.

Through his love and care for Jesus and Mary, Saint Joseph showed his love for God. Because he trusted God, Saint Joseph allowed Him to work in his life. Trusting God can be very hard, especially when we cannot see how our story will end or why God is asking us to do something. We can pray to Saint Joseph to help us trust God just as he did.

Harmony Day is observed annually on the 21st March in Australia. Harmony Day is intended to celebrate the cohesive and inclusive nature of Australia and promote a tolerant and culturally diverse society.

for the Elimination of Racial Discrimination, which was established in 1966 with the aim of eradicating racism and racially-fuelled hate crime.

The continuing message of Harmony Day is 'Everybody Belongs' and its annual observance aims to encourage inclusiveness, respect and belonging for all Australians, regardless of cultural background, and celebrate core Australian values.

Here at Saint Pius X, we welcome people from all cultures. Together, we strive to create a peaceful, more tolerant and kind world, where each person can grow into fullness of life in a world that God desires.

Orange is the colour chosen to represent Harmony Week. Traditionally, orange signifies social communication and meaningful conversations. It also relates to the freedom of ideas and encouragement of mutual respect.

On Friday, we invite your child to wear something orange to school. This may be a pair of orange socks, an orange ribbon or hair tie, or an orange hat. We would ask that normal school uniform is worn to school. Please do not send your child with orange t-shirts or orange shorts.

It has been a busy start to the year for the school Board having met twice already this year and holding its AGM this week. At the AGM, a review of 2020 occurred through various reports which highlighted the obvious challenges we all faced through COVID. It was also great however to reflect on all that had been achieved despite such a strong focus and distraction of a global pandemic. I’d encourage the school community to review the AGM documents for an awareness of what progress was made during an unprecedented year.

We were very fortunate to retain unchanged Board membership for 2021, so the ability to maintain continuity and a focus on our strategic objectives will be possible.

A number of items have been discussed this year and a few key points are summarised below.

As usual, we anticipate this year will be another busy one and as we return to the ‘new normal’ we encourage parents and the community to continue engaging with the school and ensure if you have any questions to approach any member of staff or the Board.